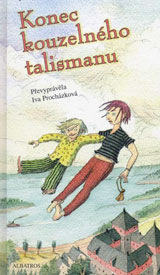 Imagine that the phone rings. “Hello,” says a voice which you don’t know. “Is this Mrs Procházková?” And somehow you feel that this voice wants to tell you something important, something exceptional. Perhaps it will invite you someplace you have never been before, inspire you to do something you have never done before.

In exactly this way the story of Anna and Niko started to develop in the autumn of 2002. I received an offer from Alexandra Buchler to take part in an exceptional project organized by the Catalan Literary Institute to co-write, together with four other authors, a book for children. “What´s it about?” I asked. “About everything that is important for you and that would interest children,” was the answer. This sounded really tempting and so I agreed.

Soon I found out that my co-workers were Menna Elfyn from Wales, Gabriel Rosenstock from Ireland, Tapani Bagge from Finland, Miquel Desclot from Catalonia and the Finnish illustrator Markus Majaluoma.

In case you are thinking: “What a coincidence that only authors from small countries were invited to participate in this project!” I can tell you that this wasn’t a coincidence at all. The Catalan Institute wanted to do just that; they wanted European children to realize how “rich” the languages on our continent are, wanted to make them curious about these things. We should feel the need to cross borders, realize the differences between ourselves and others. Far more important, however, is to explore what we have in common, the things which are important for all of us even if we speak different languages.

The adventures of Anna and Niko, who are given a magic talisman by their aunt in Lapland and thanks to which they have an amazing holiday, have been published in Czech and Irish so far. Publications in other languages are being prepared.