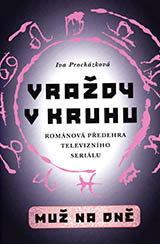 (An excerpt from the book, translation: P. O. Lawson)

The body on the autopsy table looked somewhat postmodern.  Sharply outlined alternate patches of pale and tan skin appeared on the neck, the arm pits, and in the wrinkles around the eyes. Whiskers were sprouting out of the dehydrated skin on the chin and upper lip.  Zapletal didn’t have fitness studio muscles but naturally broad shoulders, a bullish neck, compact trunk, and strong legs. The penis was short.

“Do men from the North really have smaller genitals?” Divis ventured inquisitively.  “I’ve always thought that was just a myth.”

“No myth, evolutionary biology,” explained Leblova. “Where the weather’s colder, you have to conserve heat. A body with shorter extremities can do that better. Inhabitants of colder climes usually also have smaller ears than, for example, Africans.”

Involuntarily, their eyes all shot to Zapletal’s ears. They were high set, pointed, and had puffy lobes.

“When did he die?”  Marian brought the discussion back to the matter at hand.  “Can you make your preliminary estimate a little more specific?”

“Rigor mortis and other processes proceed at different speeds in cold water than in the air,” Volavka, Leblova’s long-time assistant, commented matter-of-factly. This way of making himself seem important reminded Marian a lot of his cousin Fero, with whom he had had a weird relationship since childhood.  “At the coroner’s inquest, the temperature was 22 degrees. Under normal circumstances that would indicate approximately 17 hours after death, of course…”

Marian switched off.   The only way you could get anywhere with Fero was by cutting him down to size in juicy Hungarian. It wasn’t that easy with Volavka.  He didn’t speak Hungarian, and he was quick to take offence. Several times in the past Marian had told him that he should stick to the subject and speak only when he had something relevant to say. Undoubtedly reasonable requests, but it didn’t do much to improve their relationship. Marian had an inkling that today, once again, they would not be drinking a toast to their undying friendship.  “If, however, the body had been outdoors in the air…” Volavka pressed on.

“Hey, if we had fish up our asses, we wouldn’t need ponds,” Marian cut him off abruptly and turned to Leblova. “When did he die?”

“Between 11:00 pm and midnight,” she replied without commenting on Marian’s crude remark. “I can’t be more exact than that.”

Her estimate more or less jived with the last localization signal on Zapletal’s cell. And it corresponded with the evidence that Sedmera, the guy fishing, had given.

“Cause of death drowning?”

“As was to be expected, his lungs were full of water, but…”  Leblova hesitated. “There’s something else.”

“And that would be?” asked Divis.

“Drowning might have spared him from a different death,” Volavka, the assistant, continued eagerly, having already overcome Marian’s outburst.  Perhaps it hadn’t been rude enough or Volavka’s insult threshold had risen a notch since their last encounter. Next time he might have to increase the caliber.

“What do you mean ‘spared him from another death’?”

“Well, if he hadn’t drowned, he probably would have suffocated,” said Leblova.  “From internal causes.  Brought on by cyanide.  Also indicated by the red color of the livor mortis.”

She pointed to the dead man’s hip and buttocks.

“What exactly are the reactions to cyanide?”

Volavka took a deep breath, obviously on the verge of an exhaustive explanation, but Leblova beat him to the punch.  “It reduces the intake of oxygen. It’s the blood that transports it throughout the body, but the cell tissue can’t absorb it.  The cyanide blocks the metabolism. In this particular case, however, water got into the lungs before that could happen.”