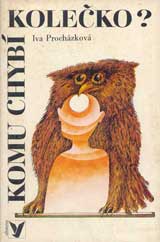 Francis and his sister Sophie are growing up in Prague during the Communist times. Nevertheless, politics is not a part of their everyday problems or joys. Their mother’s career as an actress, their father´s academic way of life and the children’s own dreams, ambitions and plans for the future are much stronger in shaping Francis and Sophie’s lives. Like many children, the siblings would love to swap the temptations of the metropolis for a calm life in thecountryside.

To an extent one can predict the direction of Procházková’s future work from this first book of hers. The book attracts children because of its modern and direct language. The story, or more accurately the chain of events, with each one dependent on the next, culminates with the premiere of a play in which their mother has the lead role. The book is written in the first person and its narrator is twelve-year-old Francis. His witty comments on family and school life show his opinion about himself and people around him. He describes emotions which are felt by many young readers all over the world.