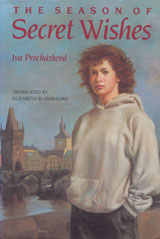 Life can be painful and unjust in a country where ideas are controlled. For Kapka, whether she´s playing soccer or walking the neighbors´ dog, eating freshly baked pastries or sharing secrets with a friend, it is also a thrilling adventure. The Season of Secret Wishes leaves you feeling, as she does, that the future is full of promise.

The book won the Deutscher Jugendliteratur Preis award for the best children’s book, the Czech Golden Bandprize for youth literature, and it was also on the list of the Best Children´s Books of the Year in the USA.
It has been translated into a number of languages.

“I have to go home,” said Kapka. “Early tomorrow we´re going to Zlenice to visit Papa and Grandfather.” She leaped over a puddle of water and turned her steps toward the street.
Radek sauntered after her. “Wait, I´ll take you home. I promised your mother I would.”

“Don´t trouble yourself. I´m not going to tell on you!”

“And what if I want to?” He´d already caught up with her. He stood in the middle of the entrance. Through the open door the silken light of the gas lamp flowed in from the street.

“So you can me wet again?” She laughed. Loudly. To overcome the wild thumping of her heart. Radek´s closeness filled her with excitement but it also made her nervous.

“For example, about the fact that you aren´t so bad.”

“Even if I´m a little howling monkey?”

“Even if you´re a little howling monkey.”

“Even if you´re not a redhead.” He braced himself by placing the palms of his hands on the wall behind her head. So he had her in a vise again. He smiled at her, a little stiffly, as if he were trying to mask his inner uncertainty. The distance between their heads slowly narrowed Then Kapka dropped abruptly onto her haunches. With one step to the side she escaped his embrace. She sprang to the exit.

“You aren´t going to put me in your collection, in case you want to to know!” In a second she was on the sidewalk. She slammed the heavy doors of the entrance behind her. They fell shut and shuddered on their hinges. She ran up to her house.

“What´s eating you?” she heard him say at her back. “Maybe you have something wrong with you?”
Kapka said nothing. She didn´t turn around. She wanted to be alone, for a moment at least. Just with her thoughts. She breathed in the sweet scent of the locust in full bloom, and in sudden joy, caused by she knew not what, she threw both her shoes in the air. They didn´t fly to heaven to shine there like two stars, as she had unconsciously expected them to, but one clattered down onto the bench and the second fell directly on her head.

“Yes,” she cried. She giggled. “I have something wrong with me!”

pasage from the book, translation by Elizabeth D.Crawford