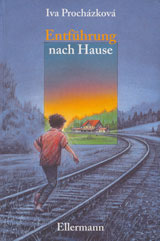 Libor´s parents died in a road accident, and he lives with his wealthy aunt and uncle. Libor has all he wants, except for real attention and love. Libor´s uncle and aunt are so involved with their professions that they aren´t able to devote much time to Libor. One fine day two gangsters kidnap Libor and demand a big ransom. Libor manages to escape and ends up with a country family called Panenkas. Everything here is completely different than in the family of Libor´s uncle. Libor sees for the first time in his life what it means to be loved and what real friendship and the feeling of family togetherness are. In order to be able to stay with the Panenkas, Libor pretends to be a different person. In the end a fateful event occurs, and Libor must either leave the Panenkas family or tell the truth. A hard decision for Libor, but the possible reward is so alluring!

A film was produced based on this book in summer 2001.

The book has been translated into a number of languages.

It should be forbidden for parents to buy motorbikes,

To ride on them,

And to die on them.

But you, Lord, you just don’t seem to get this.

If it weren’t for that dark blue Harley Davidson four cylinder, we wouldn’t be jumping over this brook together now. Without that dream machine with dual exhausts, fuel injection, and chrome muffler, I wouldn’t know that what means happiness for some can be the most miserable thing under the sun for others.

Do you think I’m crazy?

You don’t have the faintest idea, Lord, what’s things are like here on earth!

I could tell you a few things!

Maybe about how Aunt Jolana and Uncle Michal celebrated my birthday. I was twelve. Back then I wasn’t Gusta yet but Libor.

I liked it. It sounded good to me.

But that was a long time ago.

Now I know that names aren’t that important.

What’s important is. but you really have to find that out for yourself.

I rolled over onto my back and gazed up at the roof beams. The barn was hot, quiet, and full of cobwebs. The hay poked through my sweater into my back. Thoughts whirled through my head like specks of dust, and no matter how hard I tried, I couldn’t sweep them together into a pile.

First of all, there was Aunt Jolana. Her appearance on TV had really crushed me. Even before, I hadn’t thought that my being kidnapped would cause her to have a nervous breakdown but I did expect that she’d show at least a little concern for me. On the other hand, how could she know that I had been kidnapped if Mr. Long and Mr. Short hadn’t told her? And why hadn’t they? Weren’t they able to manage that? Maybe they wanted to leave my Aunt and Uncle in uncertainty for a few days and then, in hopes of a juicy ransom, get in touch? And what about Uncle Michal? Why wasn’t he on TV with Aunt Jolana? Was he insulted? Did he also think that I was a thief? Was he angry with me? Will they believe me when I return? How can I prove that I didn’t steal anything? That I hadn’t run away?

I was a mess. The longer I thought about it, the more hopeless my situation seemed. Moreover the heat was making things flicker in front of my eyes. Whenever I raised my head out of the hay, everything started swimming. My shoulder still hurt, and although the cut behind my ear had healed, now and then there was a twitch of pain. All in all, I was in a pretty wretched state. And I felt abandoned.

There are very few things that are unforgivable. That’s what Aunt Jolana had said on TV. I don’t know what she meant by that but I kept repeating that sentence to myself. It got under my skin like a splinter. There are very few things. Maybe it would be more exact to say: only one thing is unforgivable. And do you know what that is, Lord? Do you? When you realize that they don’t like you. That cannot be forgiven. But you can’t change it either.