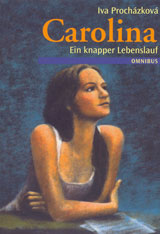 The autobiography, which sixteen-year-old Carolina writes as required by her new teacher Mrs. Haschlerka, should be short, but it isn´t. She admits that she doesn´t have any talent for brevity and so readers can gradually get to know under what circumstances Carolina came into the world, who her parents and her grandmother were, why Carolina became enthusiastic about ballet and why she left the capital Prague and moved with her parents to a little village in the mountains when she was nine. Carolina talks about the difficult time before she settled down in the new surroundings. She talks about her best friend called Caramel and especially about how she fell in love. Her idol, Lev, who is four years older, reciprocates her sentiments because he likes Carolina´s independence and originality. He is musical, plays the guitar with a rockband, and he admires Carolina´s talent for ballet. Everything changes one day. Carolina falls down when she and Lev climb up the church-tower secretly and she breakes her leg badly. She has to stay in the hospital quite a while and then one month in a convalescent home. After this she is able to walk but not to continue ballet dancing. It is an enormous disappointment for Carolina but she isn´t able to be inactive for long. She sets her hopes on acting and manages to pass the entrance exam for a theater school. Her relationship with Lev begins to break up because of the accident and the following long separation. The story ends with Lev´s journey to Canada, where his uncle lives. Carolina and Lev meet on the last day before Lev´s departure, and in spite of the past problems they both believe their love will continue.