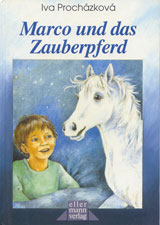 Five stories about eight-year-olds where reality is mixed with fantasy. Marco is not only the smallest in his grade, he is also very shy. But one day he wins a miraculous horse in a lottery. The horse insists obstinately that only Marco may feed and take care of him. Marco must conquer his own fear in order to manage this difficult task. The adventures with the horse cause him, surprisingly, to grow – not only physically.

Caspar is mentally unstable and uncertain after his parent´s divorce. He stutters and behaves rather aggressively at school. Only the chance meeting with Claudia, who can invent wonderful games and with whom he can´t be bored, changes Caspar and helps him to overcome his problems.

Claudia is an outsider. She is somewhat of a tomboy and the other girls in her class tend to avoid her. The moment she draws attention to herself by means of her telekinetic ability the other pupils begin to take notice of her and find out that she is very entertaining. Finally she is popular with her schoolmates even after losing her telekinetic ability.

Sara has to move. The house where she and her mother live will be sold, and Sara will soon have to leave all she likes: her school, her friends, the familiar environment. But when she finds a magic word written on the pavement, extraordinary events begin to happen. Sara becomes acquainted with a kind old man in her neighbourhood and that results in finding a new home for her and her mother.

Lukas gets a candle from a homeless man to whom he gave his school sandwich. According to the homeless man´s words the candle has magical powers. Lukas should light it and make a wish. Lukas comes home and spends all afternoon searching for the best wish. The moment he forgets banal egoistic ideas and begins to think of others, something very unexpected happens.