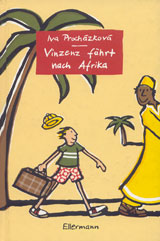 Eight-year-old Vincent looks like a stick insect. Not only did he grow extremely fast, but he also feels tired all the time. The doctors cannot find the cause of his weakness. But Mr Yaloké, the owner of the African shop, can. Mr Yaloké’s brother, a witch-doctor from Cameroon, had a vision in which he saw that Vincent’s “star of life” became imprisoned between the roots of the thistles on Mount Bhanga. If Vincent wants to become better, he needs to set his star of life free. Thus begins the adventurous story of the journey of the tall, thin boy to Africa. He meets many weird and wonderful people, is amazed by the exotic animals he sees, learns the traditions of native African people and makes friends that will remain his even though soon thousands of kilometers will separate him from them. Most important, however, is that Vincent learns to know himself – his strengths and abilities and the weaknesses that he has to overcome. His wish to become a witch-doctor is proof that his journey to Africa showed him a deeper meaning of life.