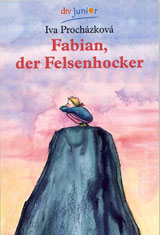 Nobody knows why nine-year-old Christopher has climbed the high rock towering above the village, and why he refuses to climb down. His mother, the priest and neighbours from the village try gradually to persuade him to climb down, but without success. One by one Christopher´s memories are shown to the reader and may reveal what happened before. That Christopher and Alex were longtime inseparable friends, how they searched together for the hidden treasure, how they cared for Christophers´ ill dachshund, how they camped out and how only the hamster, which Alex had received from his father, caused a breach in their friendship. It seems that Christopher will continue to sit on the rock forever. But when Alex finally masters his temper and climbs up to Christopher, both the boys are able to forget about their feeling of injustice and to repair the broken friendship together.