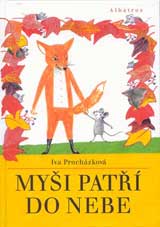 As the little mouse Quicktail tries to escape from the hungry fox Whitebelly, she doesn’t look to the left or right. No wonder then that she trips over a beer cork, gets tangled in a long tree root and then just keeps falling and falling… The fall from the high rock, however, isn’t the end of the story about the little mouse but just the beginning. Like every other good mouse Quicktail also goes to animal heaven. Animal heaven is full of swings, slides, roundabouts and so many other diversions that Quicktail can’t decide what to do next. When Whitebelly suddenly appears in heaven too, the little mouse is terrified. However, she soon finds out that everything is different here and that even enemies can become best friends. But Quicktail’s stay in heaven, surrounded by swings and all the other attractions can’t last forever and soon she will have to make a serious decision about her future.

The gate opened by itself, and Supito, with her heart pounding, scampered through to the other side. She plodded along, stopping every so often to look around. When going into unknown places, she was always very careful. Danger could be lurking around the next corner, and a reasonable mouse had to reckon with it. So that’s why she never took any risks – even after she’d died. A meadow stretched out beyond the gate with a little path zigzagging through the ferns. It led to some tall pine trees, where it sort of looked like it did behind the hunting lodge, so Supito quickly shook off all her jitters. There must be a bathroom here with water she thought and scampered along the pathway in the direction from which she could hear bubbling and murmuring.

After a while she reached the edge of the woods. She stopped and looked around helplessly. At home, in her woods, she knew every stump, every stone, but here she was afraid that she’d get lost. The path had faded, the sound of bubbling water echoed from different directions, and she didn’t know where to go.

“Keep going straight ahead!” rang out from above. She looked up and saw a spotted woodpecker. He was perched on a pine branch and was gazing down on Supito from on high, as only a woodpecker can.

“I’m looking for the bathroom,” said Supito politely, deciding not to pay any attention to the woodpecker with his superior tone. After all, she was a mouse, and she would act accordingly, not just like anybody!

“You mice are always looking for something!” the spotted woodpecker remarked. “I haven’t met one yet that could follow her nose!”

“That’s probably because we mice don’t have such ridiculous, grubby ones,” said Supito unable to ignore the woodpecker’s snide remark. With some creatures, try as you might, you just cannot speak cordially! However, her remark didn’t offend the woodpecker in the least.

“That’s a great line. I’ll have to remember it! I’ll tell it to my brother-in-law when I see him,” he laughed. “It really suits him: a ridiculous, grubby, stinking nose!”

“Maybe you did, maybe you didn’t, he’ll be furious anyway. I’m looking forward to seeing him flip his lid. You don’t know him but he’s terribly snooty, he looks down on everything,” the woodpecker informed her and took off.

“Wait, where am I supposed to go now?” shouted Supito.

“Why are you mice always going? Try flying like me. You’d get there a lot sooner!”

Supito then remembered that actually she knew how to fly. How could she have forgotten? She took off and caught up with the woodpecker in a flash.

“Straight ahead?” she cried out to him.

“That’s right,” he nodded, and Supito could hear him giggling: “Straight ahead to that ridiculous, grubby, stinking nose!”