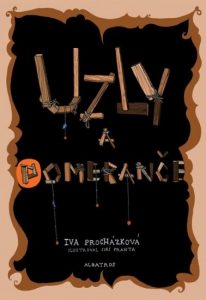 A novel for young adults in which horses play a leading role:  horses as dreams, horses as love, horses as an obligation, and horses as an expression of a longing for freedom.

Darek, fourteen, lives with his father and younger sister in a mountain village in northern Moravia.   After the death of his mother, with whom he’d had a very close relationship, his life changes.  Circumstances force him to give up many of his plans, but the increased responsibilities also bring more freedom.  He matures more rapidly than most of his contemporaries, and the people around him realize this.  Therefore it is not merely by chance that Hanka, who is a year older, is attracted to him, that his father turns to him for advice on his projects and ideas, and that an invalid neighbor relies on him for help.

In the midst of an economic slowdown, his father is laid off and can only find occasional work as a carpenter at various construction sites or in the local forests.  He has trouble coming to grips with this turn of events, and his excessive drinking becomes a serious problem.  At this point, an old friend, Anton, enters the picture and opens a whole new perspective on life for him: the two of them will start a horse farm.  Darek is enthusiastic, helping his father and Anton wherever possible.  However, there is no way to foresee the tremendous disappointment in store for him.

The story combines adventurous elements with the delicate signs of a budding romantic relationship.  It is the adolescent boy’s unwavering longing for acceptance, love, and the overcoming of cruelty, both to people and animals, that prevails.

Hanka slipped out of her vest and with one resolute tug pulled her T-shirt over her head.  She wasn’t tan.  She was the color of freshly poured acacia honey – so much nicer than he had ever imagined, really incredible. Darek couldn’t take his eyes off her.  Earlier, watching Hanka’s hand on the horse’s mane, he’d thought it was like a painting, now he felt it was even more of an artistic experience.
“Hanka, you’re…,” he started and couldn’t finish.  He didn’t know what to say.  Pretty? Beautiful?  Hold on, that all sounded so corny.  Stupid.  He caught himself blushing and lowered his eyes.  Then he caught sight of Hanka’s belly.  He knew it.  He’d seen it often before easing out from between her shirt and shorts.  But now it was different.  Something was flashing out of it.  “You had your belly button pierced!”

“I had it done in Prague,” she nodded, her eyes gleaming. “At my aunt’s.  She’s really cool about this stuff.  She’s even got piercings herself – all over. My parents don’t know yet.”“What? That your aunt’s got piercings?”
“No,that I’ve got one. And that’s not all!”
She turned, and Darek saw a little picture under her shoulder blade.
“What is it?”
“A tat.  Do you like it?”

Darek leaned a bit closer. In the cone of light beaming down through the dormer window, he could make out a tiny figure with strange horns.

“You had the devil tattooed on your back?”
“It’s Anubis, a god with a dog’s head,” she explained. “According to the Egyptian horoscope, I was born under that sign. He watches over me. He’ll bite anyone that tries to harm me. They tattooed him exactly according to my design. Does it look good?”

He hesitated. Could you say that a nail through the belly button and a dog god on the back would look good on anyone? For him they were just useless accessories. Perhaps decorative, but aggressive too.
“So do you like it?” she repeated a bit impatiently.

“Lots.” He noticed that the tone of his voice wasn’t enthusiastic enough and quickly added: “Really. It’s sort of like an update of your Facebook Gallery.”

She looked at him seriously.

“Well, if this is a gallery,” she said, “then it’s a secret one. And you are the first and only visitor.”

She grabbed her T-shirt and pulled it back on. Anubis disappeared. Darek was overcome with joy. It spread through him, wild and uncontrolled, like a brush fire. But instead of scorched earth, it left behind a powerful, warm feeling that he’d never experienced before. Now he shared something very private with Hanka! Something important! She had entrusted him with her secret. She’d allowed him to look at her. She’d showed him that she trusts him. That he’s the only one for her. This thought was so staggering that his head started to spin. And suddenly he felt that he had to do something for her in return. Something very special. Something to confirm their intimacy. But what? What?!