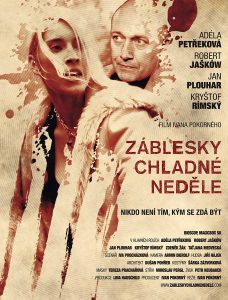 Late autumn in the Czech countryside: After a fierce quarrel with her boyfriend Richard, Dora leaps out of their car onto the road.  On impulse she flags down a passing car at a spot that is frequented by local prostitutes.  The driver, Adam, assuming that Dora is a hooker, offers her a deal: She is to pretend to be the girlfriend of his younger brother Martin at a family gathering in an attempt to convince them and their neighbors that Martin has overcome his personal crisis and given his life a new sense of direction.  To escape the violently jealous Richard, Dora takes Adam up on the offer and even accepts a generous advance payment.  Richard follows the two of them, and an action-packed car chase ensues but they manage to ditch him.  Eventually, with the help of a policeman friend enlisted under false pretenses, Richard tracks Dora down.  On an isolated farm in the woods where Martin lives, a suspenseful cat-and-mouse game begins. There is a chain of puzzling events and indications that Dora may be in danger.  Or is it in fact Dora who is the threat?  Night falls and the tension escalates.  The police arrive and Richard is arrested while Dora remains on the farm with Martin.  Although she now feels safe, the pervading sense of menace has, it seems, not been overcome.